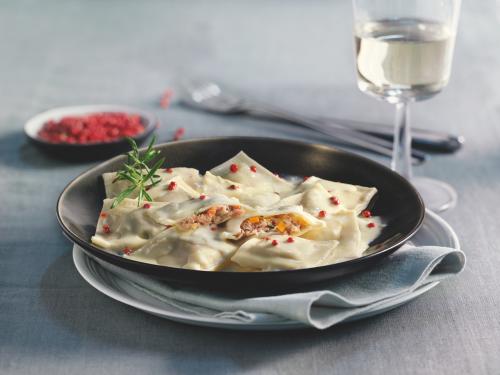 For the ravioli pasta dough:

For the ravioli filling:

For the Alfredo sauce:

Combine all the ingredients for the ravioli dough except for the egg yolk, using the dough hook on a hand mixer on the lowest setting. Knead by hand on a lightly floured work surface until you get a smooth dough. Keep the dough airtight in cling film and put in the refrigerator to rest.

In the meantime, wash the vegetables for the filling and cut into fine chunks. Melt the butter and fry the vegetable chunks in it. Chop the pulled veal, add to pan and fry briefly. Then deglaze with veal stock and reduce. The vegetables should be only just cooked. Pass the mixture through a fine sieve. Wash and dry the rosemary and strip off the needles. Chop the rosemary needles very finely and mix in with the pulled veal and vegetables, and leave to cool. Season with a little salt and pepper.

Roll out the dough thinly through a pasta machine, to create two long strips. Put a heaped teaspoon of pulled veal about every four centimetres along the centre of one strip of dough. Brush the dough around the filling lightly with egg yolk. Place the second strip of pasta dough flush over the first, press firmly down around the filling and cut out the ravioli.

For the Alfredo sauce, heat the butter in the saucepan, add the cream, lightly season and bring to the boil. Once it comes to the boil, reduce the heat and simmer for around 5 minutes, stirring continuously. Remove the pan from the heat and stir in the parmesan. Season to taste with salt and pepper.

Cook the ravioli in boiling water with a little salt. They are cooked when they float to the surface. Remove using a slotted spoon, drain briefly and arrange on warmed plates.

Spoon the Alfredo sauce around it and serve immediately.